From ‘Polish Music Day at the Wigmore Hall with Jennifer Pike and Friends’ on October 14th 2017. Krzysztof Penderecki (b.1933) – Capriccio for solo violin (UK première) Jennifer Pike explored her artistic roots in a series of three concerts in one day devoted to music from four centuries of Poland’s cultural history. The day featured everything from Italian-influenced works from the early 1600s to a UK première of a work by Krzysztof Penderecki and a world première by Paulina Załubska.

Hip Hop to Opera is a film by Michael Volpe, published by Opera Holland Park, is available now on BBC iPlayer.

Production by Apple and Biscuit Recordings.

We were asked by Christina McMaster to shoot her latest films, and in some slightly different styles.

Here she is performing Scarlatti’s Sonata in d minor K18, and Debussy’s Etude no.5 at St John’s Smith Square.

This is the first time we have been asked to prepare a complete piece from Southwell, and what an absolute stunner! Set aside half an hour, and a glass of something as this is an astonishing live performance of one of the greatest pieces of string music from the 20th century…

Alex shot some brand new promotional videos for The Coal Porters during their busy tour of the UK at London’s historic pub and live music venue The Betsey Trotwood More coming soon!

I say that as someone married to a former BBC Proms director.”

Happy New Year! We're delighted to share another clip from the 2016 Festival – The Prelude of Sir Edward Elgar’s The Dream of Gerontius.

From the 2016 Southwell Music Festival, here is the Prelude to The Dream of Gerontius by Edward Elgar, performed by Southwell Festival Sinfonia.

We were delighted to be approached by the English Concert to film their production of Handel’s opera Tamerlano at the Buxton Festival 2016, so went on a road trip through the Peak District to the wonderful spa town. Here are some of the results:

This year we were asked to make 12 videos for the Twelve Days of Christmas 2015, a selection of highlights from what was an amazing festival!

This video Edited and Produced by Alexander Barnes, filmed by Tom Maine.

Seasons has been recommended by David Mellor as the CD OF THE WEEK in the Mail on Sunday 11 October 2015. 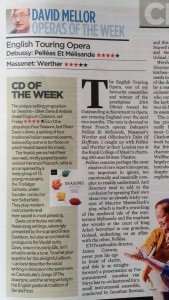